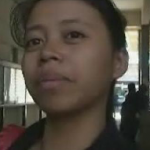 in May 2008, indoensia had serials of protest against the increasing oil prise, in 24th of May, hundreds of students went on to street and ask for changes, but the police started to attack the students, and also went into the campus to search in classrooms and such. on the same day 140 and more students were arrested, and many were beaten bloody after arrest.
this film was shooting in 26th may in bandung with student actions.
thanx for foodnotbomb bandung activists help to translate the interview and during protest.
and thanx for law student activist for the inverview…